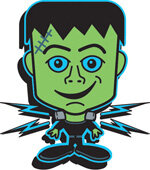 Having personality is one of the top recommendations we make at Supercharge Marketing.  Have fun with your social media campaign and make sure you come through as a person on posts and other content.  With that in mind, we’re happy to introduce a new personality to Supercharge Marketing…Frank.  Frank is our very own supporting mascot.  He comes highly recommended from a long line of work in television.  Less known is that he was the runner up for a certain insurance company’s mascot before a gecko beat him out.  Frank will be popping up from time to time in posts and other content, and looks forward to helping promote Supercharge Marketing as an identifiable brand.  He also think he should have his very own social media button, like the ones for Facebook and Twitter, but we’ve told him we just don’t think he’s there yet.