September 30, 2014 / Matt / Comments Off on Importance of Having Good Visual Content

As humans, it’s in our nature to communicate visually. Images process quickly and people are drawn to them. The saying holds true, “a picture is worth a thousand words”. People make decisions and take action quicker when prompted by images, compared to reading text. When was the last time you saw an advertisement online or on paper that consisted of a wall of text? Advertisements such as the ones seen in magazines, newspapers, and online that take up the whole page, are rarely filled with text. In fact, most ads only contain one or two sentences and 90% of the ad is occupied with the image of the product being sold.

Social media is constantly evolving and the trend is obvious; less words and more images. Blogs and websites that used to be dependent on text are now being replaced with sites such as Pinterest, Instagram, and Vine. These sites contain a very minimal amount of text because the visual content often speaks for itself and does a better job at getting the message across.

Facts: A post on FB that includes an album or picture receives 120-180% more engagement from fans than a text-based post.

Society responds more to visual stimuli and storytelling than any story we read in a magazine or on a website. And the same goes for status updates and content curation.

In addition to their visual impact, images take up more space in viewers’ news feeds. This increases the odds of a post getting noticed, especially on mobile phones with their smaller screens. What’s more, studies show that people are more likely to remember the content of a post when it’s accompanied by a striking image. And sometimes images convey concepts better than any text can.

Images are quick to digest and easy to remember, people just seem to like interacting with photos, photos can really humanize your company in a concrete and relatable way. Photos give your customers the chance to peek behind the content curtain and see what really makes your company tick. 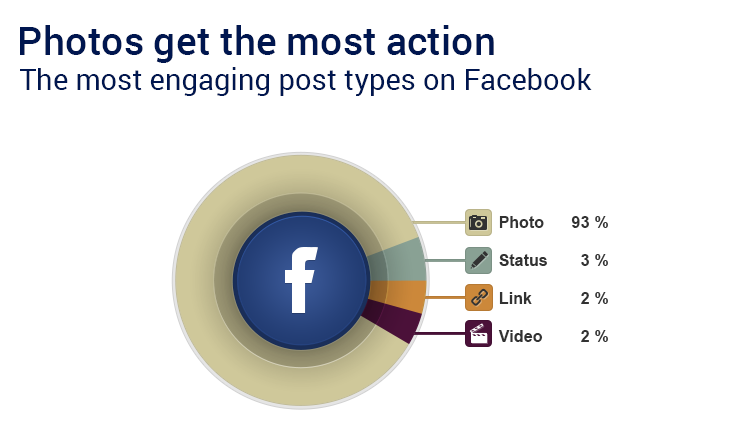